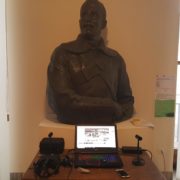 In October I made a workshop for the Consiglio comunale dei ragazzi e delle ragazze (CCRR). CCRR is the City Counsil of boys and girls and it works as an institutional organ inside the Trieste Municipality. After a first gathering in spring the CCRR decided to promote a VR workshop for young kids and the cultural association Kallipolis orginized three meetings to show the potentiality of VR. I planned the workshop to let them to discover the tools for the creation of VR content. The main theme was the first world war and it took place in the Museo della Guerra per la Pace Diego de Henriquez. Two groups worked on two different contents, the first was a virtual tour of the museum done with 360 photography the second group was involved in the reconstruction of a WWI trench. After a brief introduction done by a museum guide the groups started their work observing the photos and the objects exposed to reconstruct them in 3D with the photogrammetry technique. The result of this intensive workshop was presented at the Museo del Risorgimento on the 3oth of October in the presence of authorities and the kids parents.